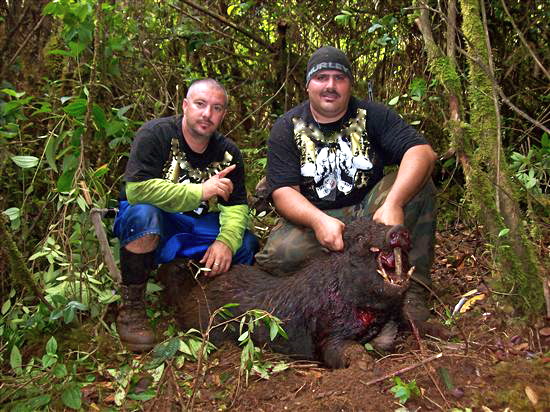 TJaye Forsythe CEO "ATROCITY PRODUCTIONS INK, LLC, and James Mr. International Dereis CO founder and both creators of 808 Hogz & Dogz, 808 hookaz, has finally evolved into the birth of RUSTYBOAR.COM
I was inspired one day just a few months ago, to create a hunting website, capture and shoot video of local boyz hunting on some exotic exclusive expeditions here in Hawaii, but most importantly! create a site for hunters to come and share their hunting experiences with each other and connect with hunters and people around the world.
So as the story goes, I put out a request to shoot a hunting video, James Dereis was one of the first guys to say "LETS DO THIS", hence the birth of "Mr. Internationl" Dereis. Keep in mind folks! Its all in fun! lol
In addition to the creation of the website name RUSTYBOAR.COM, This name was inspired by a comment Mike Figueroa made in one of our hunting videos where we caught a "RUSTY BOAR" hence the name RUSTYBOAR.COM. INITIALLY! I WANTED TO NAME THE SITE RAGINGBOAR.COM BUT THAT NAME WAS TAKEN...AWWWW...LOL
I Just want to publicly thank James "Mr. International" Dereis, "MAD" Mike FIGUEROA in building RUSTYBOAR.COM and invite any and all local hunters alike, to join in on the fun and become a member of RUSTYBOAR.COM
ALOHA TJAYE FORSYTHE AND THE BOYZ OF RUSTYBOAR.COM

In any case on the off chance that one of our certified arborist verifies that because of sickness, harm, swarming or development, a tree ought to be brought down, Arbor Tech tree care will securely…Continue

Our story starts with a long history of giving our customers proficient arboricultural administrations. Tree removal service in Oshawa  For a very long…Continue